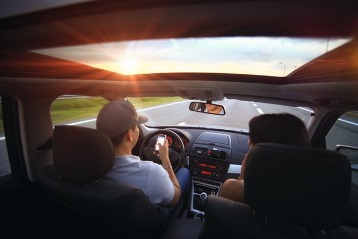 As technology advances and becomes easier to use, it is used more while people are driving. Not too long ago, smartphones were completely nonexistent. Letters and landline or payphone calls were the only way to contact somebody without talking to them in person. But now, texting and cell phone calls are the standard way of communicating, and it has become a disastrous epidemic for drivers.

In 2011, 23% of car crashs involved a cell phone. That accounted for 1.3 million car crashes in the United States. On average, the time to send a text takes five seconds. If you’re driving at 55 mph while sending a text, you have driven the length of a football field without looking at the road. Texting while driving makes a car collision 23 times more likely to happen. In 2016, according to the U.S. Department of Transportation, 3,450 people were killed in distraction-related collisions and 391,000 were injured. The National Safety Council says there has been a fourteen percent increase in traffic fatalities in the past two years. This is the first increase in consecutive years since the 1960s.

Texting while driving, simply put, is a new national crisis and must be handled as such. Drunk driving was once the scourge of our nation, but strict laws, including lawsuits by those harmed, have thankfully led to a significant decrease in drunk driving fatalities. In fact, responsibility.org reports that since 1982, drunk driving fatalities have decreased 51 percent. Such success demonstrates that we can make a difference in the safety of our roads through stricter rules, if our juries choose to enforce those rules. Many who text and drive believe they are safe while texting, but ultimately, they put everyone around them at risk of injury or death. No one should have to become injured or lose their life because they or the people around them wanted to send a text that could easily have waited until they were off our roads.

The experienced car accident attorneys at Samples Ames would like to help those victimized by irresponsible drivers who choose to text while driving. If you were injured or a loved one was killed in a crash caused by a driver using a cell phone behind the wheel, call us to discuss your case. We will help you hold them responsible for the damage they have done.