Alexander Mitchell, a resident of Provo, Utah, went from being sick to near death in just two days. 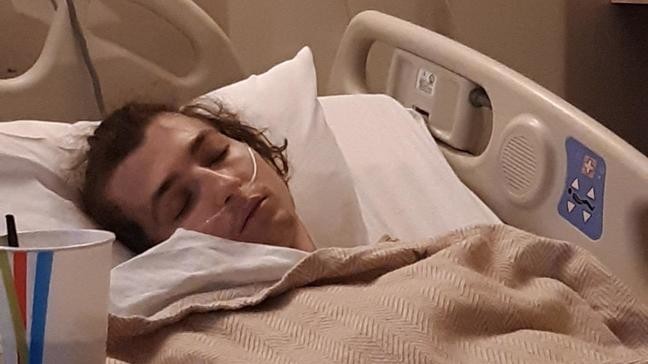 A few months ago, the 20-year-old hiking enthusiast woke up with severe nausea, chest aches and trouble breathing, which he initially (and quite mistakenly) thought were symptoms of the flu. However, his health continued to get worse and no more than two days later, he was on his death bed, only being kept alive by external life support.

Alexander’s health deteriorated so rapidly that it left his parents, and even the doctors, astonished.

Alexander Mitchell was admitted to a hospital in Payson, Utah, where he was tested for bacterial pneumonia and a myriad of other common illnesses--illnesses he was thought to have been suffering from based on his symptoms. The doctors were confounded when the tests came back negative for all of them. One test, however, picked up traces of malignant immune cells in his lungs. These cells are more commonly associated with rare, life-threatening pneumonia often found in elderly people.

The evidence of these cells was proof that Alexander had a life-threatening and often fatal injury of the lungs, Acute Respiratory Distress Syndrome (ARDS). ARDS is typically characterized by symptoms such as a severe difficulty in breathing, anxiety, agitation and fever – all of which Alexander exhibited. This condition usually follows a few hours or days after a severe insult or injury to the body like sepsis, trauma, drug overdose, blood transfusions, or major lung infections. A reduced level of oxygen in the blood is typical of this condition.

ARDS is a very serious condition, and all affected patients need to be hospitalized in an Intensive Care Unit (ICU) for emergency treatment and supportive care. While there is no specific modern treatment, intravenous or IV fluids, antibiotics, steroids, and mechanical ventilation with oxygen form the mainstay of management. Alexander’s lung failure required him to be put on the most advanced life support machine, known as Extracorporeal Membrane Oxygenation (ECMO), to keep oxygen flowing in his lungs and allow them to heal. He was care-flighted to the University of Utah hospital in Salt Lake City, which was 65 miles away from the hospital in Payson.

What ECMO does is pump blood from the patient’s body to an artificial lung that removes carbon dioxide from the blood and adds oxygen, and then pumps the blood back into the patient. This is done to restore the function of the patient’s lungs. However, being on life support comes with some risks as well. Doctors had warned Alexander’s parents that Alexander would die within a minute if he was put down from the life support. Also, if his lungs did not show any restoration during the oxygenation, he might need a lung transplant. Fortunately, after only nine days, the ECMO allowed his lungs to show improvement and he was able to head back home on within weeks of the onset of his symptoms.

The doctor suspected the condition was linked to vaping after hearing about similar cases throughout the country.

Alexander started to use e-cigarettes about two years ago because he wanted to quit smoking. And this is what his doctors at the University of Utah were attributing his life-threatening lung illness to. They said that the primary component of all e-cigarettes or other vaping devices, vape juice, could be at the fault for causing Alexander’s ARDS. According to the Food and Drug Administration, which regulates tobacco products, including e-cigarettes, the vape juice typically consists of nicotine, flavorings, Propylene Glycol (PG), Vegetable Glycerin (VG) and other potentially toxic ingredients.

According to a 2016 U.S. surgeon general report on e-cigarette use among youth and young adults, when the vape liquid is heated, the resulting vapor, also known as aerosol, is produced and it typically contains many toxic chemicals or substances derived from chemicals, including nicotine, CBD-oil and other marijuana-based products, heavy metals such as lead, volatile organic compounds and synthetic substances used for flavoring, such as diacetyl, which is often associated to a severe lung disease known as “popcorn lung” or Bronchiolitis obliterans. Bronchiolitis obliterans is a disease where the bronchioles (small airway branches) are plugged with granulation tissue, causing lung usage to be as low as 16% to 21%, as opposed to the normal 80% and is characterized by severe symptoms that are persistent and include wheezing (a dry cough that does not produce any phlegm) and shortness of breath that can be debilitating.

State health departments are reporting a growing number of cases of lung illnesses associated with vaping.

At least 450 cases of alarming and mysterious lung diseases associated with the use of e-cigarettes have been reported this summer in the US alone, Centers for Disease Control and Prevention (CDC) reports. (3) On August 23, 2019, Illinois health officials announced the first known death from a vaping-related lung illness in an adult and on September 4, 2019, yet another teenager died from lung illness related to vaping.  Some of these patients exhibited symptoms a lot milder than Alexander’s, but most of them also had malignant immune cells in their lung specimens. Such cells are indicators of a myriad of severe diseases, one of which is the rare condition known as lipoid pneumonia. Some of the common symptoms of lipoid pneumonia may include chest pain and difficulty breathing – similar to what Alexander had exhibited initially.

E-cigarettes were initially introduced as a way to help adult smokers kick their habit by offering a safer alternative to cigarettes without the tobacco. On the other hand, they are turning out to be quite harmful as well, as is evident in the case of Alexander’s lung illness. Even though the research on the long-term effects of e-cigarettes still has no conclusive outcomes, e-cigarette use is now at epidemic levels among teenagers and young adults, and that warrants concern.

How is Alexander doing now?

Alexander was young and physically fit – and that is what the doctors credit for his escape from death. A little over a month later, when he was discharged from the hospital, Alexander took up where he left off. He continued hiking, but with his lung capacity diminished by 25 percent, he was not able to walk for a long time or nearly as much as he used to. He also had difficulties with his short-term memory. Whether he will ever fully recover is not certain.

Alexander says that adults can make decisions for themselves, but there should be a warning about dangers that are not spelled out clearly about vaping.

If you'd like to speak to a lawyer about vaping injuries, you can complete the form on this page, or call or text Samples Ames at 469-466-2600.