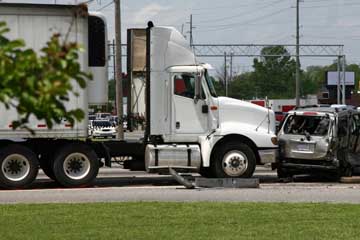 Driving on the roadways in Dallas and Fort Worth can be dangerous, especially when large trucks are sharing the roads with us. We depend on these large trucks to deliver goods to stores so we understand they need to be on our roadways. However, there are unique dangers associated with having so many trucks on our roadways, particularly if drivers have not had enough sleep, if the roadway conditions are dangerous, or if a driver is distracted while behind the wheel.

In crashes between commercial trucks and smaller passenger vehicles, the injuries to car occupants are often very severe. An experienced Dallas-Fort Worth truck accident lawyer, working with other crash experts, can often reconstruct what happened from the evidence at the scene: skid marks, the position of the vehicles when they came to rest, the type and extent of vehicle damage, the type and extent of the personal injuries, witness testimony, etc. This can show the cause of the crash, which is the first step in establishing the right to compensation.

Collisions between passenger vehicles and huge “semi” trucks tend to be one-sided fights. Nearly all people killed or injured in collisions that involve “big rig” tractor trailers are occupants of the other vehicle. The mismatch is worse if the collision involves a fully loaded rig and/or one moving at high speed. Because of the great danger to the public that shares the road with the big rigs, it is important to be sure drivers of the rigs are especially competent, adequately trained, and rested enough to avoid accidents from the effects of fatigue. Big rig drivers are held to higher standards than your ordinary non-professional driver.

Unfortunately, these rigs have several characteristics that make them susceptible to crashes:

The usual safety features in vehicles, like airbags and seatbelts, offer no protection to people in an underride crash. In fact, they tend to hold the passenger in place in a position where injury is practically guaranteed. The best protection is for the big truck to have a strong crash guard attached to the back. The guard is a metal bar that extends below the back edge of the big truck, low enough to the ground that the following vehicle’s front end hits the guard and is prevented from sliding under the truck.

These rear crash guards have been required in the United States for a number of years, but testing by the Insurance Institute for Highway Safety (IIHS) showed that the U.S. regulation was largely ineffective because the guard it required wasn’t strong enough. The following vehicle would simply crash through it and end up under the truck. A stronger crash guard, like the one required in Canada, is far more successful in preventing underrides.

Who Is Legally Responsible?

The commercial long-haul business, in which most 18-wheelers operate, is complex. The truck may be owned by any one of several entities: the driver, a transportation company, the shipper, or a third party. The driver may be working for himself or for any of the entities just mentioned.

Ultimately, the person or business which is legally responsible will depend on both who caused the crash and who may be responsible for that person’s actions. In many cases, this will be one of the following:

It all depends on the circumstances. For example, if the truck was badly loaded by the shipper, the shipper may be liable.

There are several things about delivery trucks that make crashes more likely than with other vehicles. Delivery truck drivers are often under time pressure. Companies like UPS and FedEx have strict standards on how much time it should take their drivers per delivery. Pizza restaurants may promise that delivery will occur within a specific amount of time. Drivers nearing the end of the workday may find that they have limited time to get back to the company’s garage by closing time. The time pressure encourages speeding and may impair the driver’s concentration.

And while they may be smaller than 18-wheelers, delivery trucks still need more room than passenger vehicles to stop and to turn around.

Other aspects of truck delivery that may cause crashes include:

Determining Who May Be Liable for Delivery Truck Accidents

Determining who caused the crash doesn’t always tell you who is legally responsible. In many cases, the truck’s owner and/or the driver’s immediate supervisor may be liable due to such things as:

In addition to the rear crash guard requirement discussed earlier, there are extensive rules governing big rigs in the federal government’s Federal Motor Carrier Safety Regulations (FMCSR). The FMCSR imposes detailed standards for many aspects of trucking, such as:

From the perspective of a truck crash victim, the importance of these regulations is that any violation of them which contributes to the crash amounts to negligence. In practical terms, efforts to recover damages for injuries in a truck crash involve making a detailed analysis of the relevant regulations.

Get Qualified Help Early From Our Experienced Truck Accident Lawyers

Evidence about the crash is crucial to establishing your right to recover from the driver, the driver’s employer, or the driver’s supervisor. The closer to the time of the crash you begin collecting that evidence, the better off you will be. That means that you need to get a skilled Dallas-Fort Worth lawyer involved as soon as possible before witness memories start to fade or the scene of the crash undergoes changes that make reconstruction difficult or impossible.

There are specific statutes in Texas that could impact your personal injury case if you’re injured in a commercial vehicle crash that you should be aware of. Under Texas law, you have only two years from the date of the crash to file a personal injury case. This makes it even more important to contact a team of Texas personal injury attorneys as soon as possible after your crash.

If you or someone you love was injured in a crash involving a truck on Dallas-Fort Worth Texas roadways, contact Samples Ames PLLC at (817) 605-1505 or (469) 466-2600 for a free consultation, and we can help you determine the best way to proceed.