A Menace to Society: Falling Cranes 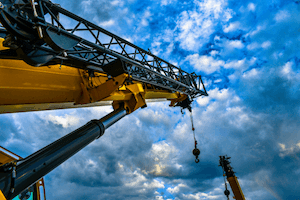 It seems that more and more, construction cranes are collapsing, causing havoc and mayhem all over our country. Unfortunately, it is an increasing practice area for us as severe injury and wrongful death attorneys—which is maddening as these injuries and deaths are completely preventable.

In fact, on June 9, 2019, a crane in Dallas came down during a severe storm, killing 29-year old Kiersten Smith and injuring multiple others, including Jay Bosquez. Jay’s wife, Yesenia Bosquez recounted returning from a shopping apartment to find the apartment she had left her husband in crushed by the giant crane. It took approximately 30 minutes for authorities to tell her that her husband had been rescued. Yesenia reported, “It felt like a year.”

These injuries and deaths never should have happened—and would not have happened if the company in control of the crane had done what it should have to protect the community in which it operates.

Unfortunately, it appears this was completely foreseeable also. The company that owned the Crane that killed Kiersten Smith, Bigge Crane and Rigging Co., had been cited with 17 OSHA safety violations in the last decade. Bigge Crane and Rigging released a statement which blamed wind conditions and explained how sad they were for what happened—but failed to take any responsibility for the torment and tragedy that was caused. The full statement can be seen here.

The attempts to blame the wind are misplaced according to Thomas Barth, a former federal crane accident investigator. According to Barth, a properly installed and prepared crane should be able to withstand more than twice the highest reported wind gust of 71 mph for that day recorded at Dallas Love Field. According to Barth, “High winds blew it over backward, and these cranes are able to withstand winds up to 140 mph . . . . This crane should not have gone over backward.”

Barth stated that this kind of disaster is entirely preventable. When asked why it still happens so often, he said it often comes down to money or inexperience. According to the former crane accident investigator, "The industry has grown so fast for cranes, a lot of people are doing things that are pushed into these positions without the proper training."

Unfortunately, towering cranes falling from the sky and crushing everything in their path is more of a problem in Texas than anywhere else in the country. Compared to other states, Texas has had about four times more deaths due to cranes.

The only thing companies that are controlling these gigantic and dangerous cranes understand is money. Nothing will change if they are not held completely responsible for the carnage they cause. An experienced personal injury attorney can help.

Samples Ames prides itself on taking on large companies in these types of cases, as the results can spur real change and help to protect our families and communities. If you know someone that has been affected by this or a similar tragedy, please let them know they can contact us for a free strategy session to answer any questions they might have and to make sure they are compensated to the full extent available under the law. Those reckless individuals who caused such a preventable tragedy must be held completely responsible and brought to full justice. You may reach me directly at [email protected] or 469-466-2600 with any questions.