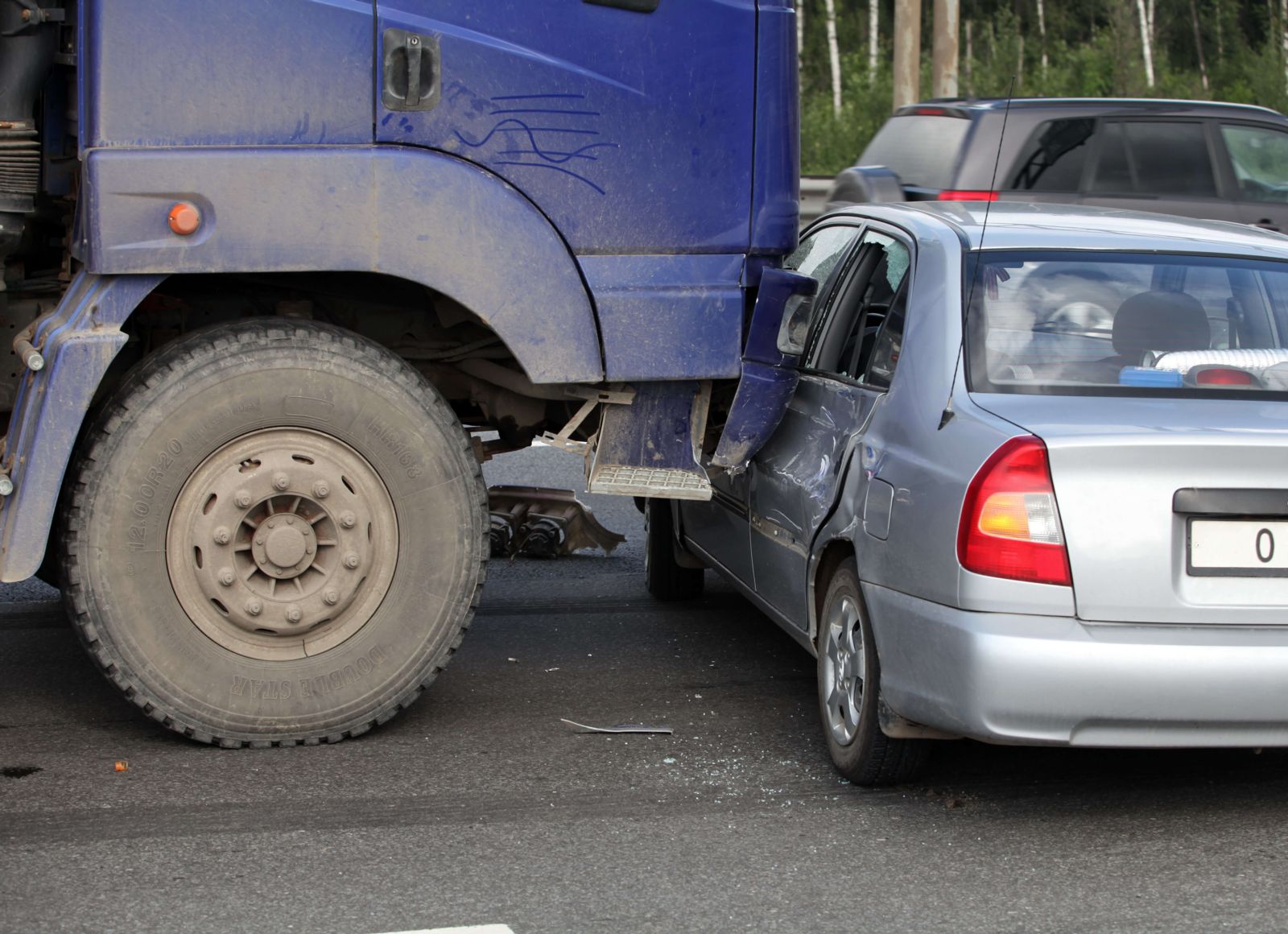 While suffering an injury because of the carelessness or wrongdoing of a non-commercial driver and an injury suffered because of the negligence of a commercial truck driver can both have devastating consequences—the similarities end there. Unfortunately, many injury law firms do not recognize and capitalize on the differences in how these cases should be prosecuted and tried, which can cost you, the injured person, significantly in the final outcome. So, what are the differences between a car crash case and a case concerning a commercial driver?

The first thing that is important to recognize is that a commercial driver is, by definition, a professional driver. Operators or commercial vehicles such as eighteen-wheelers are required to obtain specialized training and there is a separate commercial motor vehicle driver’s manual that must be mastered. Commercial drivers are often operating large vehicles on our roads with weights upwards of 80,000 lbs. Even a small hit from such a massive vehicle can transfer immense force and cause life-changing injuries.

As professional drivers, commercial vehicle drivers must abide by these regulations or rules. These rules for commercial vehicle drivers are there to help keep the motoring public safe from these large vehicles. Some examples of regulations are limitations on the hours a driver can spend driving in any given period of time. This is an incredibly important regulation as it helps to prevent fatigued large truck driver’s off of our roads, yet it is one we often see being willfully ignored—with some drivers going as far as falsifying their driving logs to drive more than they should.

Because of the danger presented by these big rigs, commercial drivers are also required to get a medical exam—typically every two years. Many times, we find that medical exam certificates are expired and drivers are operating these large vehicles when they have a medical condition that affects their ability to drive safely.

Another important regulation for drivers is that they must be periodically drug tested, as well as when they are hired and when they are in wrecks meeting certain requirements. The evidence and statistics are clear that drivers are much more likely to be in wrecks when they are impaired. When that wreck involves a multi-ton truck—the resulting damage and injuries can be catastrophic and often fatal.

Unfortunately, many law firms without experience in these types of cases just treat them as they would a car wreck case—focusing simply on the truck driver’s immediate action that caused the wreck such as changing lanes into another vehicle or running a red light. Such an approach fails to maximize the potential value of a trucking case and often fails to address the root problems that caused the wreck.

For instance, if an eighteen-wheeler runs a red light, that is the immediate negligent act that caused the wreck. Yet further investigation might reveal that the driver was driving overly tired or was driving impaired which caused him or her to run the red light. After obtaining the relevant records, it might be revealed that the trucking company employing that driver does not drug test its drivers as required by the federal motor carrier safety regulations or routinely and knowingly allows its drivers to drive more hours than allowed under the regulations--so that the company could increase its profits. This reveals that not only is the driver negligent, but the company is also separately negligent and possibly even reckless in failing to follow regulations it knows are there to save lives.

And this willful failure to follow the regulations by the trucking company is arguably much more dangerous to society as a whole and a jury is more likely to place more accountability on the company for its reckless acts.

Commercial truck drivers can also have greater responsibilities than a non-professional driver because of their training and expertise. For instance, typically if a regular driver is performing a U-turn on a roadway and is hit from behind as they complete that U-turn—the driver that hit them would be considered at fault. But with commercial trucks, many of the large trucking companies have policies in their employee driver manuals that forbid performing U-turns in an eighteen-wheeler. This is because the trucking industry recognizes how dangerous such maneuvers are in a large truck. In this instance, an eighteen-wheeler driver performing the same U-turn is likely negligent and at-fault.

Commercial truck wrecks are also different because of a concept called “respondeat superior.” This is a term in the law that stands for the concept that an employer is liable for the negligent acts of an employee committed while in the course and scope of employment. Therefore, if you are in a wreck caused by a big rig driver, you can collect from the trucking company for any negligent acts of the driver. In practical terms, this means that you, as the injured individual, can obtain a recovery from the insurance policy insuring the trucking company. Typically, this means that there will be a larger policy (often $1,000,000.00 or more) that you are able to recover from if you suffer serious injuries. Conversely, in Texas, a regular driver on the road typically carries significantly less insurance from which you can recover. In Texas, the minimum policy limits for a non-commercial vehicle in Texas is only $30,000.00. It is easy to see how even a moderate injury can quickly overwhelm a $30,000 policy—leaving the injured person to deal with any bills or costs that exceed $30,000—if they do not have underinsured motorist coverage.

Having a larger policy to recover from is essential in severe injury cases and also allows experienced plaintiff’s attorney’s to invest significantly more resources into the case to ensure that your recovery is maximized such that full and fair justice is served.

Additionally, commercial truck accident cases are different from car accident cases because there are often more defendants available, which can allow for more insurance policies to provide payment of any damages in cases of catastrophic injuries. While the driver and the trucking company that employed the driver are almost always going to be negligent in these cases, other parties such as the shipper, broker, or trailer owner might also have committed negligence which caused the injuries to occur. It is important to hire a law firm that is familiar with identifying these other potential sources of recovery and how to successfully prosecute a case against these other parties in order to maximize your recovery in an eighteen-wheeler or other commercial vehicle case.

Finally, some firms that are less experienced in the field of trucking cases, will entirely miss that it is a commercial truck wreck case to which the Federal Motor Carrier Safety Regulations apply. When we envision a commercial truck, we often think of big rigs. But often smaller moving trucks, and even regular trucks that are hauling trailers that exceed a certain weight, will qualify as commercial motor vehicles. If a law firm is not trying a case as a commercial vehicle case when it could, that is a great disservice to you as the client.

Trucking cases require experience and knowledge in prosecuting commercial vehicle cases—knowledge of the applicable regulations, commercial motor vehicle driver’s manual, industry standards, possible at-fault parties, and the best trucking experts. If such cases are worked up by a law firm just as they would work up a non-commercial car wreck case, you are very unlikely to get the case result that you deserve and is just. Please give us a call anytime to discuss your potential eighteen-wheeler or commercial truck case. Over the phone, we can discuss your case with you free of charge and answer any questions you have about your injury case—and you will get to talk with an actual attorney that is experienced in car wreck and truck wreck cases.

Were you injured in a truck or car collision? Contact a Dallas-Fort Worth Trucking Accident Attorney Today.

If you or a loved one was injured in a truck or car accident in the Farmer's Branch, Carrollton, or Dallas-Fort Worth area, our highly skilled and dedicated truck accident attorneys and car accident attorneys can help you receive compensation for lost income, medical bills, and injuries. Contact us online today, or call (469) 466-2600 (Dallas) / (817) 605-1505 (Fort Worth) to schedule your free consultation right away. Remember — you don't pay unless we win!